Hmm. When the Northeast had an unusually snowy winter, it proved that global warming was a myth. But when temperatures are much higher than usual for mid-March … crickets chirping. 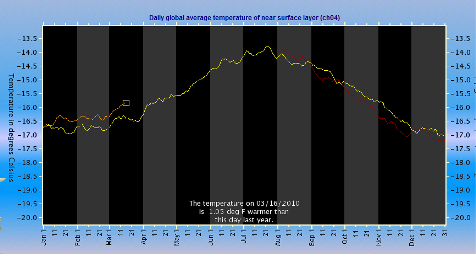 So to recap, global temperatures suggest that 2010 is on track to be one of the hottest years on record.  Yet the global warming deniers at Fox News and other right-wing media outlets see fit to run things like the image below.

Paul Krugman presents: The Eh Team This page has a well-established policy of linking to any post that successfully combines a multinational […]

Jon Stewart dusts off his Glenn Beck impersonation to mockingly follow the (direct) money trail of Newcorp’s $1 million donation to the GOP. The Daily […]

While Congressman Grayson should be applauded for his Medicare buy-in proposal, at least one fundamental issue needs to be worked out — […]